This is the first installment of my dual mock series in which I’ll be doing a 4 Round Mock for each team in the AFC and NFC West. With 8 user controlled teams, the burden of realism  is placed on the Draft Network Mock Draft Simulator’s AI, controlling the other 24 general managers. Therefore there won’t be draft-to-draft big board consistency and  there’s also a good chance you’ll be seeing the same players making a recurring appearance across drafts.  With that as precursor, lets address the needs and potential fits of the AFC and NFC West. (I will be posting the NFC West Mock as a separate article)

Round 1, Pick 32: Damon Arnette CB Ohio State; While taking an elite RB prospect surely is enticing, the defending super bowl champions don’t have that luxury. With Rashad Fenton and Chardavious Ward currently slotted as starting corners, adding quality corners has to be imperative. Arnette is a scheme diverse first round talent who excelled for the past 4 years in Ohio State’s vaunted secondary. He would be Kansas City’s best corner on day 1, giving this defense a dynamic they’ve missed since departing with Marcus Peters.

Round 2, Pick 63: Clyde Edwards Helaire RB LSU; This would be an absolute dream scenario for the Chiefs, as I would be shocked if Edwards Helaire finds himself still on the board at the end of round 2. Edwards Helaire is easy to fall in love with, his game is pro ready, perhaps being the best pass catching back in the class. His running ability is nothing to frown upon either, he has elite contact balance and toughness and reminds me a bit of a prime Doug Martin. He would take this offense to next level (if possible) and would be a welcome upgrade over Damien Williams.

Round 3, Pick 96: Damien Lewis OG LSU; The Chiefs offensive line over-performed last year and has to improve on the inside, enter another LSU Tiger Damien Lewis. Lewis is powerful guard who thrives in the run game and has championship pedigree. I’d expect him to start at left guard week one.

Round 4, Pick 138: Justin Strnad LB Wake Forrest; Kansas City lacks depth in their linebacker room. Strnad is a redshirt senior who was a captain this past year and was on his way to national recognition before a season ending injury in week 7. Strnad has sideline to sideline ability and I think could challenge for a starting job in year 1 with developmental upside going forward.

Round 1, Pick 15: Henry Ruggs III WR Alabama; I’ve been vocal about this fit throughout the process #chalk. If Denver believes Drew Lock is their franchise QB they have to surround him with talent. Tim Patrick is Denver’s #2 WR right now and while this class perhaps has unprecedented depth, an elite prospect like Ruggs III would potentially give Lock the best wide receiver duo in the NFL. Ruggs is no John Ross, his world class speed is met with a nuanced route tree, sure hands and a versatile skill set bred for the modern game.

Round 2, Pick 46: Troy Dye LB Oregon; John Elway did a good job of filling defensive holes with veterans AJ Bouye and Jurrel Casey, linebacker however, is still a need. Troy Dye is a long rangy coverage linebacker who isn’t as physical as perhaps Vic Fangio would like but has the processing and athletic profile to grow into a very good NFL linebacker.

Round 3, Pick 77: Darnay Holmes CB UCLA; Another need for Denver, Holmes is a former five star recruit who can come be your Chris Harris Jr. replacement in the slot. He’s undersized like Harris, but is a fluid athlete and doesn’t shy away from contact. Holmes is a high floor rotational piece from day one.

Round 3, Pick 83: Malik Harrison LB Ohio State; Six picks later, we grab the run stuffing thumper to compliment the second round selection of Dye. Harrison has an NFL ready frame and game, while his ceiling isn’t of Dye’s, they both would play to each others strengths and gives this team two future starters on day 2.

Round 3, Pick 95: Natane Muti OG Fresno State; Guard over tackle here for Denver, Muti could be the draft’s best guard but has been plagued by injury throughout his college career. He’s a mauler in the run game who would do wonders for Phillip Lindsay and Melvin Gordon. The upside is worth it with Muti and will be a steal if he can stay healthy.

Round 4, Pick 118: Rashard Lawerence DL LSU; Lawrence is a high floor depth piece who should be able to come in on running downs and be a rotational plug next to Jurrel Casey, Dre’Mont Jones, and Shelby Harris.

Round 1, Pick 12: Jerry Jeudy WR Alabama; While the Raiders weren’t completely inept with Antonio Brown unexpected departure last fall, Jerry Jeudy is an elite prospect who will be a NFL number 1 on day one with an absolute floor of a Calvin Ridley esque fringe number 1. Jeudy would give whomever the quarterback of the future is in Vegas and elite receiver and would make Darren Waller, Tyrell Williams, and Hunter Renfrow’s life much easier.

Round 1, Pick 19: Jeff Gladney CB TCU; A dream scenario for the Raiders here, where best player available meets need. They are sorely lacking in the corner room opposite 2019 second round pick Trayvon Mullen. Gladney has a play style that I could see both Gruden and Mayock falling in love with. Gladney is a high floor CB that reminds me a lot of Jaire Alexander, home run for Vegas.

Round 3, Pick 80: Kyle Dugger S/LB Lenoir-Rhyne; Dugger was a physical force at the division II level and I think could be utilized well at the second level of this defense. Dugger is raw, but has desirable traits that would work as a “undersized” outside LB or as a safety across from Jonathan Abram, who supposedly is set to play Free Safety this year.

Round 3, Pick 81: Jalen Hurts QB Oklahoma; Speaking of Gruden/Mayock players, Hurts screams a quarterback that Gruden would love to get his hands on. Hurts has all the toughness and poise you want from the position, and I think his passing deficiencies can be schemed around. Pairing him with former teammates in Josh Jacobs and first round pick Jerry Juedy, would give this team an exciting young core. I would expect Hurts to compete with Carr and Mariota for the starting job with the luxury of sitting him if need be.

Round 3, Pick 91: Jordan Elliot DL Missouri; The Raiders actually have some nice depth on the interior defensive line. That being said, Elliot brings a valuable rushing ability to the interior and can be worked in as a rotational interior rusher on passing downs. High ceiling pick here for Mayock and co.

Round 4, Pick 121: Michael Ojemudia CB Iowa; Ojemudia is a zone corner who has length and physicality requisite for the position. While he might not be a perfect scheme fit in Las Vegas, the Raiders need all the corners they can get.

Round 1, Pick 6: Justin Herbert QB Oregon; While taking a left tackle here and heading into 2020 with Tyrod Taylor might be the best move in order to win now, the value of the sixth pick and not having a QB for the future in LA is too good to pass up. While Herbert checks all the physical boxes, boasting NFL arm strength, accuracy and a 4.68 forty, he needs further development before being an franchise QB.  Sit behind Tyrod and when ready reap the benefits of LA’s impressive offensive arsenal.

Round 3, Pick 71: Troy Pride CB Notre Dame; Strength on strength here as the Chargers add a developmental outside corner who can develop under Desmond King, Chris Harris, and Casey Hayward. He has all the tools to be an impact corner at the next level and can thrive in possibly the NFL’s best secondary.

Round 4, Pick 112: Tyler Johnson WR Minnesota; One of my more favorite fits in this draft, Tyler Johnson is a joy to study on tape. He’s an NFL ready slot who wins consistently at the short and intermediate levels. He would thrive in a complimentary role with Keenan Allen and Mike Williams, with the upside to become a high level WR 2 if the Charger’s decide to pass on paying Mike Williams. 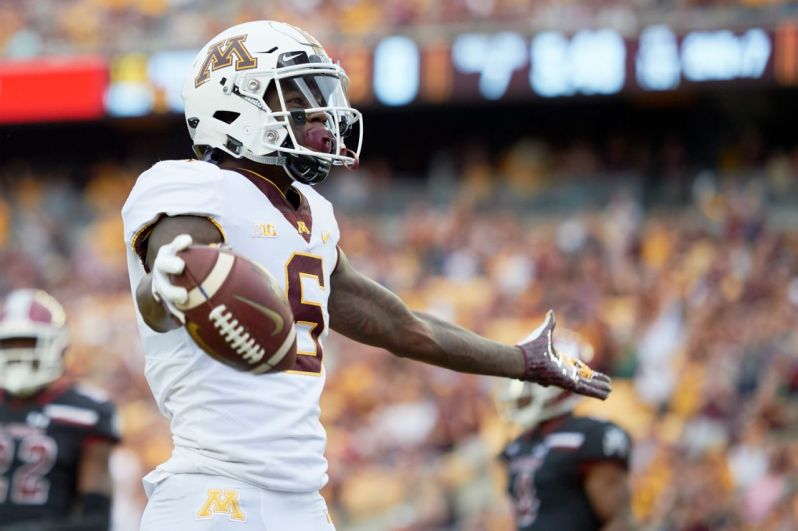