Let’s just pretend I wrote this right after Dre Greenlaw tackled Jacob Hollister on the 1-yard line at the end of Week 17.

I knew I would be celebrating a victory at the end of the 2019 NFL season, but admittedly, I did not expect it to go exactly like this. After rattling off 9 straight wins in the high-stakes BJP Dynasty League and sliding into the #2 seed for the playoffs, I was very vocal, probably too vocal, about my chances of winning the league’s inaugural season. Then came the first playoff game. Poof. Done-zo. Amari Cooper did what he does in important situations and had 1 catch, and my season was over. One and done. I was the Lamar Jackson of the BJP League. Distraught at the money I had just lost, I did some deep thinking, and then it hit me. The Wins Pool! I did some simple math and what do you know, I had won. All this after King Klepp himself had predicted me to come in 7th (!!!!!) place. Let’s take a look at how I got there. 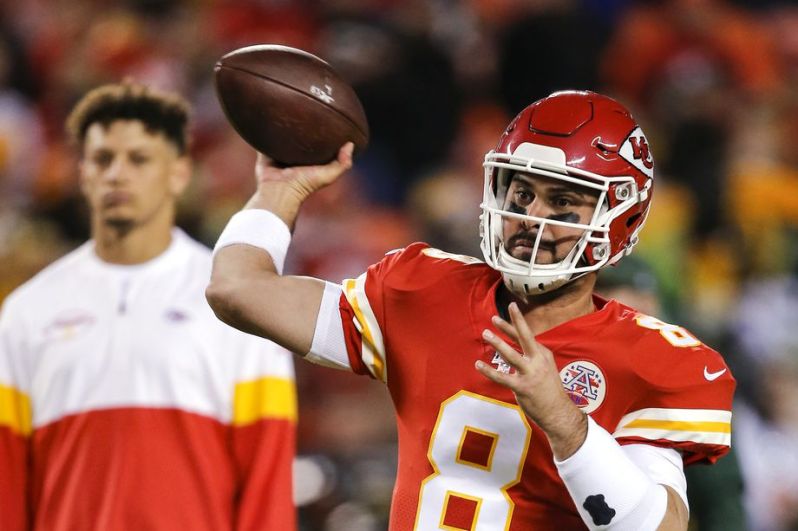 Most Crucial Win: Week 9 vs. Vikings, “The Matt Moore Game”

Here’s a fun fact: when I took the Kansas City Chiefs, the eventual SUPER BOWL CHAMPIONS, with the 1st overall pick, I received one “wow” and one “sheesh.” The pick was easy for me. The Chiefs have the best player in the league in Patrick Mahomes, and the defense looked to be much improved from last year with the additions of Tyrann Mathieu and Frank Clark. The Chiefs stumbled a little bit during the midpoint of the season, but closed the season out with 6 straight regular season wins. The state of Missouri (and me) collectively held their breath when Mahomes got hurt in Week 7 against the Broncos, but he only ended up missing 2 full games. My most crucial win came during those two games, when Miami Dolphins legend Matt Moore completed 25 of 35 passes for 275 yards and a touchdown in a 26-23 win over Leigh’s Minnesota Vikings. Moore was virtually flawless in his time filling in for Mahomes, completing 65% of his passes and throwing 4 touchdowns and 0 interceptions. The former Oregon State Beaver skyrocketed in my Backup QB Power Rankings after his gutsy performance this season. Congrats, Matt.

Directly after Tommy took the 7-9 New York Jets, whose quarterback missed time this season for having an illness that is normally given to high school sophomores at their first homecoming dance, I took the team with the best record in the NFL. I won’t harp on the rest of the Wins Pool too much for passing up on the Ravens (everyone besides me actually passed on them twice), but a team coming off a 10-6 season with one of the fastest players in the league at QB was too good to pass up. I’m not the biggest Lamar Jackson fan there is, and I find it a bit funny that he has yet to win a playoff game, but I am always a sucker for dual threat QBs, and I projected Lamar to at least be a good starter in the NFL. Did I think he was going to become only the second unanimous MVP in the history of the league? Hell no, but I’ll gladly reap the benefits. My most crucial win for the Ravens this season is another Week 9 bout, this time a 37-20 win over Tommy’s 2nd overall pick New England Patriots, a personal revenge game for myself against all the haters who mocked me for picking the Chiefs over the Pats.

Once again, another playoff team from last year with an elite quarterback was looked over in the Wins Pool draft. While Russell Wilson is the most dependable QB in the NFL, and also in the running for best hair, the rest of the team was not so dependable. The Seahawks routinely played in close games this past season, with 12 of their 16 games being decided by a score or less, making them not the most relaxing team to have to watch on a weekly basis. With the Seahawks defense of old being gone, finishing only 22nd in points allowed this season, the key to the Seahawks winning all those close games was their All-Pro quarterback. Wilson had arguably the best year of his career in 2019, throwing for 4,110 yards, 31 touchdowns, and a measly 5 interceptions. Tyler Lockett had a breakout year as Wilson’s primary target, and rookie lab king DK Metcalf looked like he probably should have been a first round pick in last April’s draft. These aren’t your Legion of Boom Seahawks, but as long as DangeRuss is around, they’ll be a threat. My most crucial win was an ugly 21-20 win over the lowly Cincinnati Bengals in Week 1, where 4.22 speedster and frequent training room patron John Ross had 25% of his catches on the season and 66% of his touchdowns in one game against the Hawks’ secondary. That would have been an embarrassing L.

Most Crucial Win: Literally all of them

This year’s Mr. Irrelevant was the Miami Dolphins, a team that pundits pegged as “Tanking for Tua” as early as last summer. Going 5-11, the Dolphins were the biggest surprise out of my 4 teams, and potentially might have been my favorite team to watch. Led by one of my favorite players of all time, 37-year old Conor McGregor doppelgänger Ryan Fitzpatrick, the Dolphins started the season off 0-7 and looked to be heading towards potentially a record of 0-16. The offensive line was putrid, spot-starter Josh Rosen had the passer rating of JaMarcus Russell, and running back Kalen Ballage even had a game where he turned 9 rushes into 9 yards. But after getting their first win in Week 9 (Week 9 was really an amazing week for me), this Dolphins team turned a corner, going 5-4 to finish the season, including a shootout 38-35 win in the Toilet Bowl over the Bengals and a 27-24 win over the Patriots, thanks to Mike “King Douche” Gesicki, that some are saying ended the Patriots’ 20-year dynasty. Remember all those years you took DeVante Parker in the 6th round of your fantasy draft thinking this would finally be the year he broke out? Well, he finally did this year, and I’m sure you didn’t take him. I’m a registered #BrianFloresGuy, and I love what he’s cooking down in South Beach. Miami is my favorite landing spot for Tua Tagovailoa right now, and I wouldn’t mind if the Dolphins threw the Lions pick 26 to move up to pick 3 and take him.

I will be back in September to defend my crown. Stay safe!